It’s 1865, and the Civil War, a war that killed about 625,000 Americans – two percent of America’s population at the time –has finally ended. In the wake of the war, the three “Reconstruction Amendments” are ratified. These three amendments were so full of promise – they freed all enslaved people, guaranteed equal protection under the law to all citizens, and granted voting rights to African-American men –that they almost seemed to justify the war’s mind-boggling bloodshed. And yet, even a cursory survey of American history of the 100 years following the Civil War reveals that many of the rights these amendments guaranteed were just empty promises to many citizens. Here’s just one example: Although the Fifteenth Amendment (ratified in 1870) promised all male citizens the right to vote, as of 1964, only seven percent of Mississippi’s black residents were registered to vote. It would require years of civil disobedience, which was often met with brutal repression, to finally achieve the passage of the 1965 Voting Rights Act. For African-American citizens living in many jurisdictions, this act was the first piece of legislation to actually give them anything like equal access to the polls. 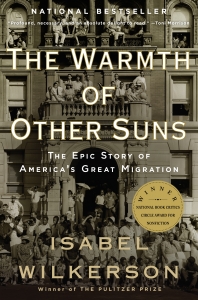 Upper Division Social Studies Teacher Nancy Barre, who has taught at Park for 12 years, had long been wrestling with the fact that Park’s seventh graders ended their study of American history with the Reconstruction Amendments, with no idea that Americans, to this day, continue to struggle with how to truly fulfill their promise. Two things happened that inspired Nancy to propose a change in the curriculum that would address this challenge. The first was reading Isabel Wilkerson’s The Warmth of Other Suns (2010), a narrative nonfiction account of “The Great Migration,” the time period between the 1920s-1960s when approximately six million African Americans left the rural south for new lives in cities in the north. Wilkerson’s book helps build a bridge between the African-American experience right after the Reconstruction Era to the present. The second was the need to rethink the social studies curriculum in Grade VIII, once Grade VIII became students’ final year at Park.

At The Park School, students are often the recipients of the amazing benefits that come with teacher passion, and the contagious nature of Nancy’s passion easily spread to the rest of the social studies team. In the summer of 2016, the Grade VIII social studies team met to begin planning a new eighth grade course. Using the “Understanding by Design,” backward planning model, the social studies teachers, librarians, academic technology leaders, apprentices and I joyfully took on the enormous and fulfilling task of redesigning the eighth grade social studies experience. We knew that in the ten-year journey of learning at Park, as students move from grade to grade, they also move alternately from a study within our country to studies around the globe.

After deciding to focus on Human Rights, the team thought it would make sense to create a connection between how our country responds to rights and how the world responds to rights. Park students now analyze the results of those three Reconstruction Amendments through the lens of human rights, while focusing on the experience of African Americans and women from the mid 19th century to the present by asking the following essential questions:

While designing this course, the team focused on creating a learning environment that asks students to use what they learn in authentic and meaningful ways. Skill development would require not only discipline-specific skills, but also the essential 21st century skills of collaboration, creativity, critical thinking, and communication. The National Council for Social Studies (NCSS) states, “Social studies programs should include experiences that provide for the study of the ideals, principles, and practices of citizenship in a democratic republic.” This course would inspire civic duty and advocacy based upon the formulation of an opinion that is justified with evidence.

I am wonderfully amazed and humbled by your approach to these subjects and by the content matter that you are teaching the children. They are so so lucky to be able to explore and grapple with these issues, and to hear all sides of the subject, and to form their own opinions – all in the context of a supportive environment.”
parent of eighth grader 2017

In the Upper Division, we pay close attention to the developmental needs of middle schoolers. Knowing that pre-adolescents are motivated by autonomy, competence, relationships, and fun, this course is not without its moments of impact! Students use their voices to contribute to a class current events blog, based on student-selected news articles or videos. Students learn to evaluate sources, which provides an understanding that bias exists in news reporting and that they are capable of recognizing bias in news sources, as well as developing fact-based understandings of issues. In the school segregation unit, most students are shocked to realize that the angry mobs screaming at buses that are taking African American students to schools outside of their neighborhoods were actually residents here in Boston. Their surprise continues in the women’s rights unit, when they learn through research that women weren’t able to possess their own credit cards until 1974 or that pregnant women had no legal protection from discrimination in employment until 1978! When students turn their attention to human rights around the world, it is difficult for students to grapple with how many basic needs are unmet for so many refugees: 1.87 million people from Syria alone! Inequities becomes clear, both in our country and abroad.

The Grade VIII social studies course is an eye opener – students become incensed about injustice and are curious to learn about where else injustice may exist. They choose not only to learn more but, even more important, to take action! This course supports and inspires the individual civic-minded voice of students, culminating with a project called, Advoc8!  Each student engages in research around a topic of interest, whether local, national, or international. As successful advocates do, they research the topic to shape their understanding, use that research to inform others, and then determine what and how they can impact the needs they uncover. Now in its second year, with four committed civic-minded teachers guiding students toward this end, we look forward as a community to being inspired by our Grade VIII.

Pamela Penna is the Director of Curriculum and Instruction at The Park School. In this role, she guides curriculum development and improvement, supports quality instruction, oversees professional development for faculty and staff, and develops teacher training based on identified educational needs. Before joining the Park community as a faculty coach in 2012, Pamela was a consultant at Teachers21, a non-profit dedicated to improving the professional practice of Pre-K-12 educators, where she consulted with schools throughout Massachusetts on curriculum design, effective assessment practices, professional learning communities, differentiated instruction, and effective teaching.

On a recent Thursday afternoon, Betsy Platt’s Pre-Kindergarten class read books and
Does your child repeatedly refuse to get dressed in the morning? Is
Robert Greene, a nationally recognized consultant who specializes in organizational development and
On Friday March 2 and Saturday March 3, Park’s Upper Division (UD)
Each year, librarians and children’s literature fans nationwide excitedly anticipate the announcements
Go to Top