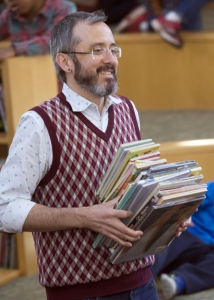 Christian Porter, Park’s Lower Division librarian, was six hard years into a literature PhD program when, in 2001, he decided that the world of traditional publish-or-perish academia was just not where he wanted to be.

A career counselor asked if he’d ever considered teaching at an independent school. He hadn’t. But he began looking into this idea, and his research led him to Park’s teacher apprenticeship program. It was only then that he realized that the large brick-and-concrete structure across from Larz Anderson’s sledding hill was actually not an office building, as he had assumed for the short time since he and his husband Russ had moved into a house on Rockwood Street, a scant half-mile from Park. Not a bad commute.

Geographical serendipity aside, upon his acceptance as an apprentice Christian immediately found Park to be a welcoming, open-minded place. And he learned that this attitude applied to teaching roles as well, as he was offered the chance not only to teach English in the Upper Division — a typical placement for someone with his academic background — but to try his hand in a first-grade classroom.

He was a bit skeptical at first, but not for long. Working with younger children was, he could soon tell, “his calling.” He loved these students’ joyful exuberance and their non-linear, unpredictable thinking.  Christian is still energized by the fact that younger children “are not necessarily playing by the adult rules of reason,” and that they are so often refreshingly willing. “Nietzsche said that it is easier to say no than to say yes,” he says. “That power of the positive — I feel that kids often do that much better than adults.”

In 2005, after a few of years of classroom teaching, Christian took what began as a temporary position in the Park library, filling in for the retired Lower Division librarian. Now the pieces really clicked together. Not only could he continue to work with younger children, but he could fully engage his lifelong love of books — books as receptacles of meaning and beauty; books as beautiful, tactile objects in themselves. And he would have the privilege and responsibility of introducing his students, just embarking on a lifetime of reading, to the library as a whole: a rich repository of ideas, information, and images. As Christian describes it, “a place to make discoveries, and a place to discover yourself.”

When I walked into Park’s library on my first visit as a parent volunteer, Christian’s upbeat, ever-so-slightly mischievous voice was music to my tired ears: “Hello! Can I make you an espresso?” Now that’s my kind of librarian, I thought. (And who knew there was an espresso machine back behind the main desk?) But the caffeine fuels a great deal of very hard work, which falls into three general categories:

First, Christian and Park’s three other librarians maintain the library’s 6,000-square foot space and manage its 30,000-volume collection. Christian has oversight of the holdings used by the Lower Division. When it comes to the constant process of building and editing the collection, he refers to the concept of ‘multi-asking’: be it via review journals, online sources, or conversations with parents, teachers, local bookstore owners, or others, he says, “The more people you can consult, the more well-rounded your product, or your vision, or your outcome, will be. At the Park library, we live that.”

Second, Park’s librarians provide support — not only to students, but to the entire Park community — with teaching materials, recommendations, and other resources. “From the moment we open those doors until we close the doors, we really have to be able to meet the need, in the moment,” says Christian. He sees this on-demand role as vital to an institution with a constant need for information and inspiration both inside and outside the classroom.

It’s Christian’s work as a teacher, however, that demands the lion’s share of his energy. He describes his approach to teaching as a balance: while he’s always searching for new teaching ideas and revising his methods for different developmental stages, he maintains a focus on a few core principles.

He never teaches the same book twice. His love for the variety and craft of picture books has only grown during his time at Park. Thinking back to his study of sonnets during graduate work, and his sense that the confinement of this short poetic form in fact “seemed to provoke creativity,” rather than dampen it, he sees a similar richness in the myriad ways picture book authors and illustrators tell stories within the covers of a typically brief, 32-page format.

As for the act of reading to students, he says, this “just cannot be a passive experience.” “I insist that I learn from them,” he continues, observing that this often occurs naturally. He points out, for example, that before they learn to read, young children are highly attuned to accessing meaning from other visual cues.  Students regularly notice details or subtleties in illustrations that he has not — and he’s delighted when this happens.

Meanwhile, even as he may draw upon storytelling and performance methods to help engage students, Christian’s abiding priority is for them to find their own direct connection to whatever book he is presenting. “I do not want their experience to be about me,” he says. “I do not want to simply be entertainment. The more I can disappear in their learning experience, the happier I am.”

Finally, he’s adamant that “the action not stop with the book,” always encouraging students to see stories as jumping-off points for more thinking and exploration, building what they will later will understand as ‘text-to-self’, ‘text-to-text’, and ‘text-to-world’ connections. 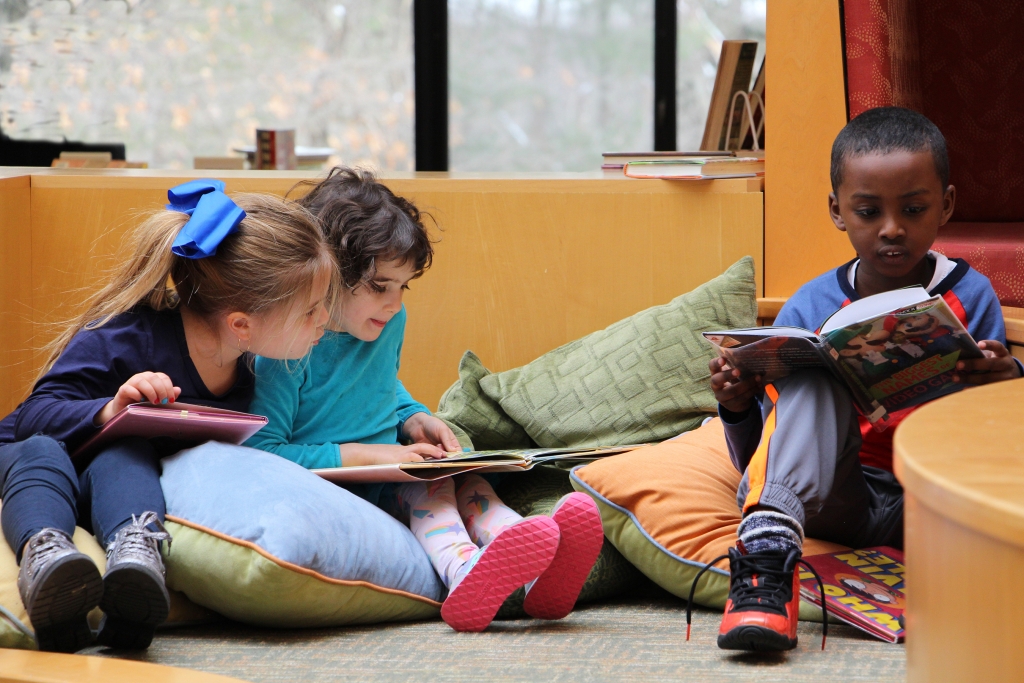 Library-based projects help to expand that exploration, progressing in scope as students become more familiar with the library from year to year. Mr. Porter introduces PreK students to clues in a ‘treasure chest’; they brainstorm their own stories based on those clues before he reads them a related book (always a newly-acquired book that these students are seeing before anyone else at Park). He guides Kindergarten students to focus on their own individual interests. They can seek out picture books in subject-themed book bins, and at regular intervals throughout the school year they take home a mystery book (in a special purple bag) that Christian has matched to the interests and/or traditions of the student and his or her family. First graders become judges in a real-world competition, when, along with 10,000 other kids from around the globe, they participate in the Irma Black Award, rating a selection of picture books chosen by the Bank Street College of Education in New York. “This is a huge deal!” says Christian, “We call it ‘Picture Book Boot Camp.’” As they learn to critique a book’s various elements, he exhorts the students, “We are going to exercise our picture-book muscles! We’re going to look at design, we’re going to look at art, we’re going to look at story!” Second-graders do video journaling, in which each student picks a book they love and records a recommendation video which is saved in their digital portfolio to be shared with other students and families. Other projects over the years have included making buttons with slogans distilled from a book or author’s important ideas, and an art project in which students read a picture book biography of the artist Joseph Cornell and then mimicked Cornell’s style in small box sculptures.

Midway through his second decade as a member of the Park faculty (and as a parent of two daughters who’ve both attended Park), Christian is grateful that the School continues to so actively nourish the critical resource that is the library. His work allows him to share his love of words and pictures, to think and teach across disciplines, and to interact closely with every Lower Division student, from the time they enter Park through their second grade year. “I get to go on this journey with them,” he says, as they make discoveries — and discover themselves — with the help of books.

For many, a student-centered approach to schooling is defined by caring relationships
Dear Ms. Formisano, I think I should be on your empathy task
On a chilly night in February, more than 80 Park community members
The capacity of an organization to undergo a program review and renewal
In Park’s Secondary School Counseling Office, we partner with students and families
Go to Top