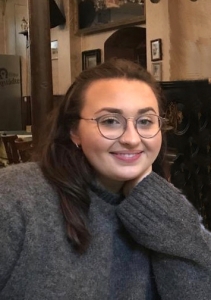 Tori Alvarez returns to Park as 2019 Graduation Speaker six years after her own graduation from Grade IX.

Since Park, Tori has lived and studied in the Boston area, on the West Coast, and abroad. Throughout, she’s maintained a commitment to community service and an interest in language and culture that has roots in her own family’s experience. She feels that in many ways these passions germinated during her time as a Park student.

Tori started at Park as a kindergartener, following the footsteps of her sister Luisa ’07. Her mom, Maria Fleming Alvarez ’81, was already in the building — teaching Upper Division Spanish and serving as an eighth grade advisor from 1999-2015. Tori remembers her time at Park very fondly. (Though she notes, laughing, that being the child of a faculty member, especially as one becomes a teenager, is “better sometimes than others.”) She became active in community service projects, choosing Horizons for Homeless Children as her ninth grade work-study placement. Overall, she says, “I remember just laughing a lot! Obviously there was a lot of learning, and I left there feeling very prepared academically. But I also don’t think I’ve found anywhere since where there’s that much fun, and where you’re that connected — not only to your peers but to faculty as well.”

That said, Tori moved on from Park to continue making connections to her community. In high school at Dana Hall, she volunteered with Best Buddies, an organization pairing able-bodied helpers with folks challenged by disabilities. After a semester at Reed College, which she realized wasn’t the right fit for her, she travelled to Germany, exploring and taking classes before returning to begin her sophomore year at Boston University. She’s just finished her junior year at B.U., majoring in Spanish literature. She currently volunteers to help animal friends at the MSPCA.

Tori plans to move to Madrid after college, where she hopes to earn a master’s degree in education with the goal of teaching English. Her sister Luisa lives in Madrid now, and her parents plan to retire there, so she looks forward to having her family all in one place — something that’s not always been true, with her father serving in the military for many years. Tori has always been bilingual, speaking both English and Spanish at home growing up. Her future plans reflect her desire to stay connected to both cultures. And for her interest in teaching — in itself a kind of community service — Tori again credits her experience at Park, where great teachers showed her just how fulfilling, and how fun, teaching could be.

At the end of my first year at Park, I want to
Congratulations to the Class of 2019! Our soon-to-be graduates have completed their
What does a ten-year educational arc look like? Intuitively, we understand that
At the end of each school year, the Park Library launches faculty
Summertime is always the best of what might be. ~ Charles Bowden
Go to Top