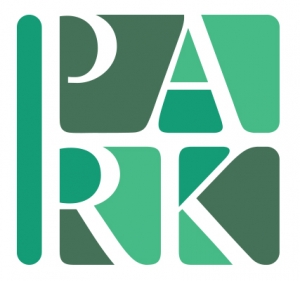 This fall, Park families and visitors arriving at school found a new logo on the Goddard Avenue driveway sign, and within the grass island at Park’s main entrance, a re-designed concrete-and-wood bench bearing the same logo. Further along in one’s approach to the school, on the glass to the right of the front door, is a square variation with the stacked letters P/A/R/K forming an almost abstract motif.

While these are not the first appearances of Park’s new brand identity — various communications (including The Park Parent) have quietly introduced the change over the last year or so — the new physical signage announces the full roll-out of a project five years in the making. This past summer was a very busy one for Park’s Director of Communications Kate LaPine and Director of Stewardship Flo Farrell, as they spearheaded the launch of the new design plan across physical, print, and online channels.

Back in 2014, Board of Trustees members Katie McQueeny and Neela Pal, along with the communications team and others in Park’s leadership, first identified a need for a re-think of the School’s approach to communications and marketing. At that point, besides Park’s signature green color and the original charter oak seal with its motto of “Simplicity and Sincerity,” Park’s branding lacked overall coherence and consistency. It appeared that this could to some degree be limiting Park’s visibility and appeal in the educational marketplace.

In order to clarify Park’s brand identity, Katie and Neela led an exercise which identified the pillars of Park’s educational approach: academic excellence; diversity, equity, and inclusion; support for the whole child; vibrant community involvement; and compassionate, innovative, individualized teaching. Also early on in the process, Katie, Neela, and Park’s communications team settled on a theme that could anchor Park’s brand ‘storytelling’ — that of the evolving JOURNEY that students and parents take from PreK through Grade 8.

With these elements established, and following a comprehensive audit of Park’s existing marketing approach by communications consulting firm mStoner, Park decided to move forward and requested proposals from several local and regional designers.  In the end, a proposal from Providence, RI-based design firm Pop Kitchen (PK) won out. Kate explains, “Their proposal conveyed that they could take the essence of Park’s ethos and turn it into a visual representation. We felt that they understood what our community is all about, and weren’t trying to stamp something on top of us.”

After conducting a variety of focus groups within Park, and talking with other elementary and secondary schools so as to get a sense of how Park is perceived in the larger educational marketplace, PK produced six very different possible design approaches. From these, one developed into its final form.

PK’s Creative Director Rich Rose credits Park’s leadership and communications team with a principled, sophisticated vision that nonetheless gave the designers room to create. By the time Head of School Scott Young began his tenure at Park in July 2018, the re-branding design process was well along, but he was able to participate in several key discussions, and both Rich and Kate are grateful that it was not too late for him to be meaningfully involved. In fact, Rich notes Scott’s specific contribution to the design: the suggestion of adding the small oak leaf gesturing towards the lower curve of Park’s “P.”

The new Park logo is technically a ‘logotype’ (the name of an organization or business customized typographically, as opposed to a standalone pictorial icon or symbol). It aims for elegance and legibility in itself, while offering dynamic possibilities for different applications.

Rich notes the importance of the design’s ‘counterforms’, the shaped fields that are created by the spaces within and between the shapes of the serif font ‘letterforms’ themselves. These fields can be filled with pure color, as they are with various shades of green in a version of the main logo and perhaps most strikingly in the square variant. This treatment has its own symbolic possibilities, suggesting Park’s commitment to diversity, equity, and inclusion, and even nodding to the playful spontaneity of a child filling in spaces with crayon. (In the square logo version, one might also see reference to alphabet building blocks, and/or to artist Robert Indiana’s legendary LOVE design.)

The counterforms can also simply remain ‘open’, allowing a single background color – or the white of a sheet of paper, to show through. Or they can be filled with photographs. This last option lends itself especially well to the central metaphor in Park’s overall brand strategy. Rich states: “Not all logos have a narrative quality or function, but Park charged us with expressing the brand attribute of ‘focus on the JOURNEY.’” He continues, “Park is of course very interested in how a child ‘turns out’… but not so much that they will sacrifice the present moment.” Rich points to the photographs filling the logo’s counterforms in the poster within the Admission Office’s new ‘viewbook’ for prospective families. The photos, each a vivid moment in time, proceed in a flow from PreK to Grade 8 graduation. Kate points out  that Park’s new website has also been designed both graphically and thematically around this idea of the student’s journey.

Meanwhile, insofar as a comprehensively refreshed brand identity itself marks a new moment in the School’s own institutional ‘journey’, Park’s brand history has not been abandoned.  Not only is the original Charter Oak motif referenced in the new logo’s single young leaf, but the original 1888 seal remains an active part of the brand portfolio, appearing on official correspondence, diplomas, the footer of the website, and elsewhere.

Moving forward, says Kate, “I feel that there’s room for evolution with this logo.” Visually, that single leaf might come to be recognizable as a standalone icon for the school.  Perhaps the warm orange colors tried out in the new viewbook will find their way into other communication channels. And narratively, the School’s brand ‘story’ will need to keep pace with an ever-evolving educational world, while remaining true to Park’s core values. For now, though, the comprehensively-reworked brand identity aims to bring a coherent, fresh vision to all of Park’s communications.

In the first week of October, The Park School hosted its very
For many of us, time is our greatest resource, and for a
Rahimah Ahmad, RN  (Nurse) Rahimah is both a new employee AND a
The Parents’ Association Community Service Committee is dedicated to planning hands-on service
2019 Women’s World Cup Merrill Hawkins (English Teacher) and Heather Offen (Science
Go to Top