For parents of school-aged children, it can feel as if the acronym STEM (Science, Technology, Engineering, and Math) and its newer variant STEAM (adding Art) are ubiquitous in presentations of current educational theory. Two decades into the 21st century, as we look around at our technologically-driven world rife with massive scientific challenges, it’s not hard to accept the urgency of prioritizing these academic disciplines. But lest our eyes glaze over from over-exposure to jargon and generalities, how about a more focused look at exactly how and why STEM learning benefits students at Park?

While all of Park’s curricula prioritize the skills – both practical and emotional – that will empower students to take on big challenges, STEM educators have a particular mandate to enable students as creative problem-solvers. Often involving inter-disciplinary projects, classes impart not only key information, but a familiarity with essential ways of learning and doing. Students learn to craft experiments to test their theories, and then to iterate solutions: to imagine, design, observe, test, re-design…and repeat…until they arrive at a final product. And, it turns out, success in these technical processes is rooted in much warmer, fuzzier social-emotional strengths: empathy, open-mindedness to others’ ideas and perspectives, collaborative thinking, confidence, and resilience in the face of inevitable setbacks. Robotics provides a vivid example. Introduced beginning in PreK by members of the Technology and Makerspace team, and taught in dedicated units within the science curriculum in Grades 2 and 3, and then again in Grades 5 and 6, it offers a rich learning modality.

Science Department Head Brian Beaver, now in his 26th year at Park, has witnessed the evolution of science teaching theory throughout those years. He notes that Park is currently working to inform the science curriculum with research-based best practices laid out in the NGSS (Next Generation Science Standards), a set of standards for science education that was created by teachers and researchers across 26 states, and published in 2013. Park is not necessarily adopting every NGSS recommendation, and as always will tailor teaching to match the School’s philosophy and mission. Still, Brian says that the way these new standards define and conceptualize science education offers an extremely valuable framework.

From the NGSS’s own summary (read much more detail at https://www.nextgenscience.org/):

“Within the Next Generation Science Standards (NGSS), there are three distinct and equally important dimensions to learning science. These dimensions are combined to form each standard—or performance expectation—and each dimension works with the other two to help students build a cohesive understanding of science over time.

CROSSCUTTING CONCEPTS:  Crosscutting Concepts help students explore connections across the four domains of science, including Physical Science, Life Science, Earth and Space Science, and Engineering Design. When these concepts, such as “cause and effect,” are made explicit for students, they can help students develop a coherent and scientifically-based view of the world around them.

SCIENCE AND ENGINEERING PRACTICES:  Science and Engineering Practices describe what scientists do to investigate the natural world and what engineers do to design and build systems. The practices better explain and extend what is meant by “inquiry” in science and the range of cognitive, social, and physical practices that it requires. Students engage in practices to build, deepen, and apply their knowledge of core ideas and crosscutting concepts.

DISCIPLINARY CORE IDEAS:  Disciplinary Core Ideas (DCIs) are the key ideas in science that have broad importance within or across multiple science or engineering disciplines. These core ideas build on each other as students progress through grade levels and are grouped into the following four domains: Physical Science, Life Science, Earth and Space Science, and Engineering.”

Brian highlights the equal weight given to the three NGSS “dimensions.” Students’ grasp of key scientific practices and their understanding of broad ideas valuable to interdisciplinary understanding are considered to be just as important as the factual information they learn. He points out, “A really interesting change has been the inclusion of engineering as a part of what it actually means to teach science.”

Students gain experience with principles of coding, while they practice the iterative skills so integral to design and engineering – and to the closely-related scientific process built around hypothesis, experimentation, and data-gathering.

With this in mind, engineering projects often support Park students’ study of different scientific subjects. Fifth graders learning about weather, for example, take to the Makerspace to design and build an anemometer with which they can measure wind speed. Seventh graders studying plate tectonics design earthquake-resistant structures. Eighth grade physics students design, build, and test catapults so as to better understand Newton’s laws of motion. (Brian recently enjoyed watching the action as students aimed at targets and measured their efforts… “We ended up using cubes of sponges as projectiles…it was awesome!”)

This is not to say that engineering practices somehow dominate Park’s science education. Engineering is not a focus for students working in the Outdoor Learning Garden, as they come to know how the nutrients in the dirt under their fingernails will nourish seedlings; nor for seventh graders carefully observing and measuring seasonal changes in a 1×1 meter plot of woodsy ground on the Park campus; or eighth graders discussing how ocean temperatures, rising due to climate change, are disrupting ecologically critical organisms like coral.

What engineering does encapsulate particularly well, however, is the iterative, often collaborative process so vital to problem-solving. Our scientific inquiry and understanding can reveal the problem. Now, how do we devise a solution? 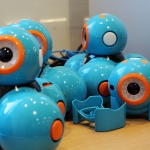 With more and more systems available for students of all ages and levels, (Park’s extensive offerings include: Bee-Bot, Cubetto, KIBO, Code-a-pillar, Dash and Dot, Ollie, Sphero, Lego WeDo and Lego Mindstorms EV3) robotics occupies a sweet spot at the intersection of design, engineering, and programming. Students gain experience with principles of coding, while they practice the iterative skills so integral to design and engineering — and to the closely-related scientific process built around hypothesis, experimentation, and data-gathering. Yes, the robots themselves are remarkable, but their greatest value in this context is as a tool for learning. “Robotics is my favorite thing….seriously. I’ve been doing it for a long time!” says Kim Fogarty, Academic Technology Specialist and Lead Makerspace Educator. Sharing her enthusiasm is Megan Bounit, Academic Technology Head, who works with Kim to introduce robotics to Park students beginning as early as the PreK year.

Speaking of these earliest explorations with young students, Megan says, “We literally start with ‘What is a robot?’ ‘What are the elements that all robots have in common?’ There are a couple of terms that we teach at the youngest level: algorithm, roboticist, troubleshooting. (The kids get really excited when they learn about troubleshooting!) And key concepts like ‘sequential thinking’…so: they give the robot commands, and then watch it respond to those commands.”

Kim adds that teaching younger students other essential concepts such as the idea of ‘input and output’ can help them understand the wide range of forms a robot can take (versus the iconic sci-fi image of a walking, talking, beeping humanoid). And she emphasizes how hands-on educational robotics systems can be: “The systems that we use with the youngest students are all device-free, so they do not require the student to use an iPad or a computer in order to control the robot. Not only does that keep them off of a screen when they don’t need it, but it also really directly associates their actions to an outcome, so they get immediate feedback on whether what they intended to do actually happened.”

Kim and Megan regularly team up with other Park teachers to present robotics in a way that supports learning in other areas. In early February, for example, PreK students – who had been learning in their homerooms about Lunar New Year traditions, and had just performed a dragon parade – programmed Bee-Bot robots to do their own mini-parade (and made tiny costumes for their little machines, too.)

Separate from these various interdisciplinary projects led by the technology team, Park’s science curriculum now includes dedicated units of robotics study in second and third grades and again in fifth and sixth grades. Carol Buzby, teaching sixth graders, reviews elements of computing history and theory and leads discussions of robotics in current events (travel to Mars, anyone?). These older students practice more advanced coding skills, and they take on the challenge of constructing and programming Lego Mindstorms EV3 robots of their own design. Carol lists engineering and programming objectives such as “escape the box,” “don’t hit the pedestrian,” “follow the line,” and “throw a ball over a wall,” culminating in a “Robolympics” competition. Projects build on basic robotic and algorithmic concepts introduced in earlier grades, taking advantage of students’ more developed math skills to allow even richer opportunities in iterating ideas through stages of prototype.

As the students try out their designs, failures are not only guaranteed, but absolutely vital to the process. So, flexibility and resilience are essential. Optimistic, organized collaboration is as valuable as individual improvisation. In a wonderful paradox, the task of making a computerized machine perform a series of discrete actions – such a seemingly inorganic pursuit – ends up building the kind of deeply human social and emotional skills Park is committed to nurturing in all students as they progress.

Noting how much students tend to enjoy working with robotics, Melinda Huffman, who teaches science to Grades 2 and 3, points to leaps that can take place in this environment. “Sometimes students who don’t excel in other areas do excel in these engineering and robotics projects, and then they become leaders, and are looked at in a different light by their peers”, she says. Kim agrees, “It can be a way of lifting students up.” She goes on to point out the opportunities to move away from often stubborn gender roles. “Especially by starting early, kids learn that this isn’t something that just boys do, or something that only the more ‘mechanical’ kid does; everybody engages. I’ve seen girls speak up more in a robotics discussion or activity than I have at any other time.”

Megan emphasizes that while much of this happens organically, she and other teachers also proactively and deliberately craft projects so as to build social and emotional skills, beginning with their very youngest students. They intentionally provide a limited number of robots, for example, so that students must work in teams. They encourage students to communicate, to advocate for themselves, to empathize. They prompt careful ongoing reflection — not just about the strengths or weaknesses of a piece of code or a robot’s design, but about the experience overall: What did you learn? What did you like or not like? How did it go with your partner? What would you like to do next? How?

Park students will mature into a world that faces massive scientific concerns – climate change, resource scarcity, and diminishing biodiversity to name just a very few. Not to mention intractable patterns of racial and social injustice. We’ll need them to keep their wits about them. They’ll need to draw on all that they’ve learned from every field of study; STEM can’t do it alone. Robots – in themselves – can’t save the day. But Park’s thoughtfully envisioned STEM teaching will send students  along well-equipped with the knowledge, skills, and social-emotional intelligence to continue striving for greater understanding and more inventive, robust, sustainable solutions.

Last Saturday, the energy in Park’s West Gym was palpable. As the
PreKindergarten teachers Betsy Platt and Hilary Fabre have joyfully embraced the world
It’s March! Along with the waning winter cold and promise of warmer
Mindfulness is the act of focusing our attention completely on the present
This year, Park launched a new website that poses a vital question,
Go to Top