The world needs your voice. Go ahead — it doesn’t need to be perfect as long as it’s from your heart.
~ Peter H. Reynolds

Some of our smallest Park students are getting the message that their voices have a big impact on the world around them. Antiquated is the notion that children should be seen and not heard, when clearly they have much to teach us with their unadulterated view of the world and downright hilariousness. More importantly, developing skills of advocacy, standing up for self and others, and demonstrating kindness and empathy, are practices that cannot begin too early in life.

This semester, students in Grade 1 have been working through a unit on speaking up. At this level, the focus of exploration is on joyfully celebrating differences of identity — from race, to gender expression, to religion, ad infinitum along the spectrum of what it means to be a human — and the understanding that we see you, just as you are. 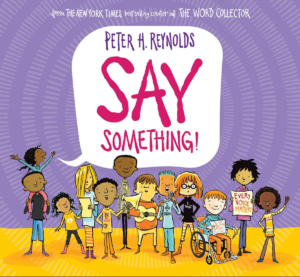 “We began the unit by reading Say Something! by Peter H. Reynolds,” explained Grade 1 Teacher Emily Denault. “Students learned that there are so many different ways to stand up and share their voice — with words, obviously — but so much can be communicated by just being physically there for someone else or expressing an idea through art.”

After reading the book, first graders reflected on what they wanted to say themselves, and committed their ideas to paper speech bubbles. The resulting display lined the walls outside their classroom, calling to classmates and anyone else in the hallways of the Lower Division to come and listen to their voices. 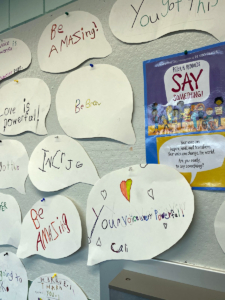 “It was just amazing to walk by and read those speech bubbles,” said Assistant Lower Division Head Ildulce Brandao. “So many powerful messages straight from the hearts and minds of our students.”

Building upon the first step of self-expression, Emily and her class went on to read about many different ways to identity, learning about as wide a variety of perspectives, stories, opinions, and voices as they could. “After we’d finished reading, the students chose one book that resonated with their own identity or personality and used it as the basis to create a message that we then wrote on protest signs.”

The placards are prominently displayed on Park’s campus, which is both nerve-wracking and exciting for the first graders. What will people think? What if they don’t agree? What if nobody cares what I have to say? Part of the classroom conversation is to encourage students to bravely speak their truth even when it feels vulnerable. It’s a practice that is more difficult for some of us than others, and it has potential to create meaningful connections with others as well as a deeper understanding and confidence in self.

Make it a point to seek out the Grade 1 signs next time you’re at the Park campus, and try to sit with them a minute. How do the simplicity and sincerity of the messages make you feel? And when’s the next opportunity you’ll take to say something?

In the time leading up to the launch of The SPARK Campaign,
Middle school…those critical years when the adolescent identity emerges and kids crave
If you had been at Park recently, you might have seen a
Thinking back to the quiet campus to which I arrived at Park
Have you ever picked up a Rubik’s Cube and haphazardly tried to
Go to Top